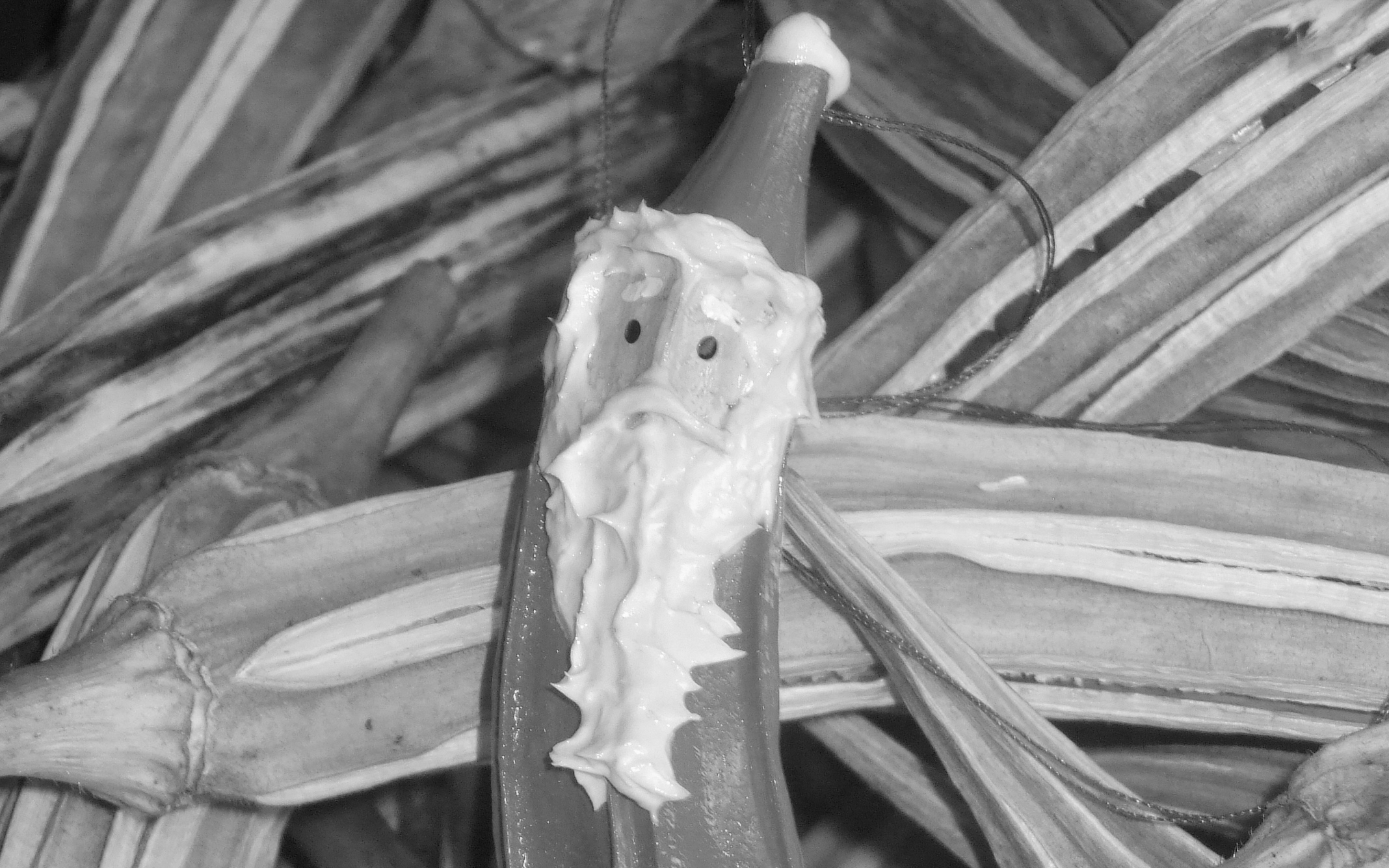 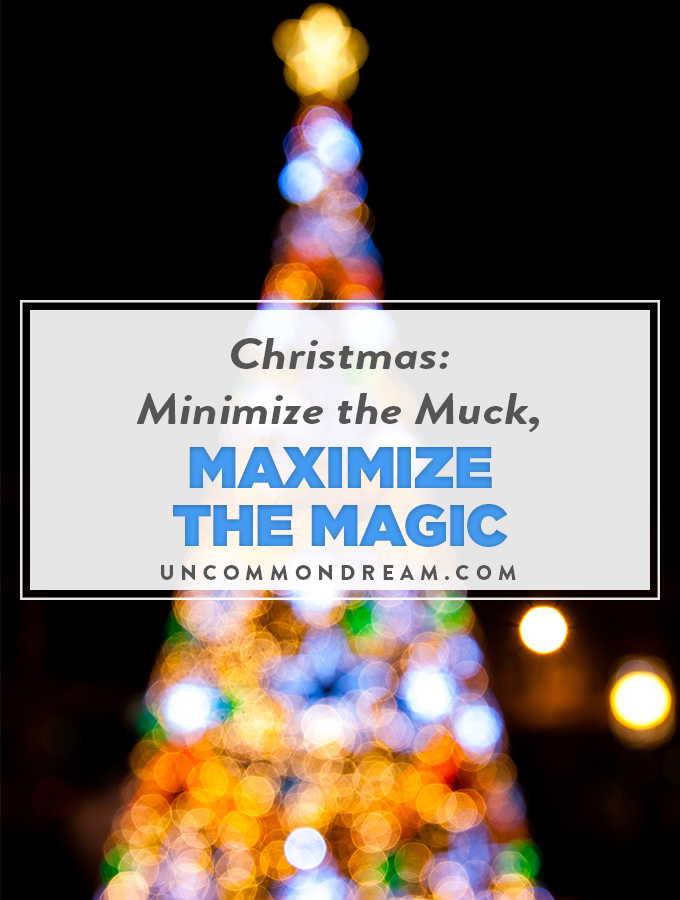 Somewhere in a photo box is a series of pictures I took as a kid documenting my Christmas haul for the year. I’d strategically pile everything up together in front of the fireplace and take a picture. That was usually sometime after I got off the phone with each of my best friends so we could share the list of our respective loots.

I used to measure the success of a Christmas by how far past the bottom of the tree the Christmas gifts spread. It wasn’t even too much about quantity – big gifts were great because they forced things to spread even further. My grandparents would show up on Christmas morning and I would quietly hope that as my grandfather walked through the door with bags full of presents he would need to go out to the car to get still more.

I loved buying and wrapping gifts for family and friends. I’d usually wait until I had something for everyone on my list before I’d tackle the task of wrapping. Then, I’d set to work while watching a predictably corny Christmas movie and get a silent thrill the bigger my pile of wrapped gifts to give grew.

Man, I totally loved the giving and receiving of Christmas.

I also got pretty sucked into the sentimentality of the rest of it too: Christmas cookies, The Carpenters playing on the CD player (as I typed those words sitting in a cafe, I noticed Karen serenading us with some Silent Night at that very moment… of course she was!!), putting up decorations, loitering around the adults when my dad hosted his office’s annual holiday party, lighting the luminaria that our neighborhood collectively lined the streets with every Christmas Eve. Sigh. I’m a big dork for all of it.

I’m so grateful I had the type of childhood that allowed me to make those memories. Now, here I am, with a three year old who is finally at an age when he’s starting to remember. Before this year, he has always been so little that I never put a great deal of thought into establishing standards and traditions for what he’ll grow up remembering his Christmases to be. We’ve been sticking to some holiday basics during our adult years, but this is the first year I have felt it’s time to start setting the Christmas traditions that will define the holiday season that I hope our children will grow to love.

As Michael and I are having these conversations, the plan is to keep our customs aligned with our values and goals. “Mindfulness” is what comes to mind. : ) We want the magic, not all the muck.

It’s perhaps a bit ironic, but the holiday season seems to be the most joyful, stressful, magical, excessive, crazy, cozy time of the year. Years ago, my approach to Christmas was something of a hands-thrown-up attitude. I didn’t want to spend so much money, but it just seemed like the way it had to be. But does it? 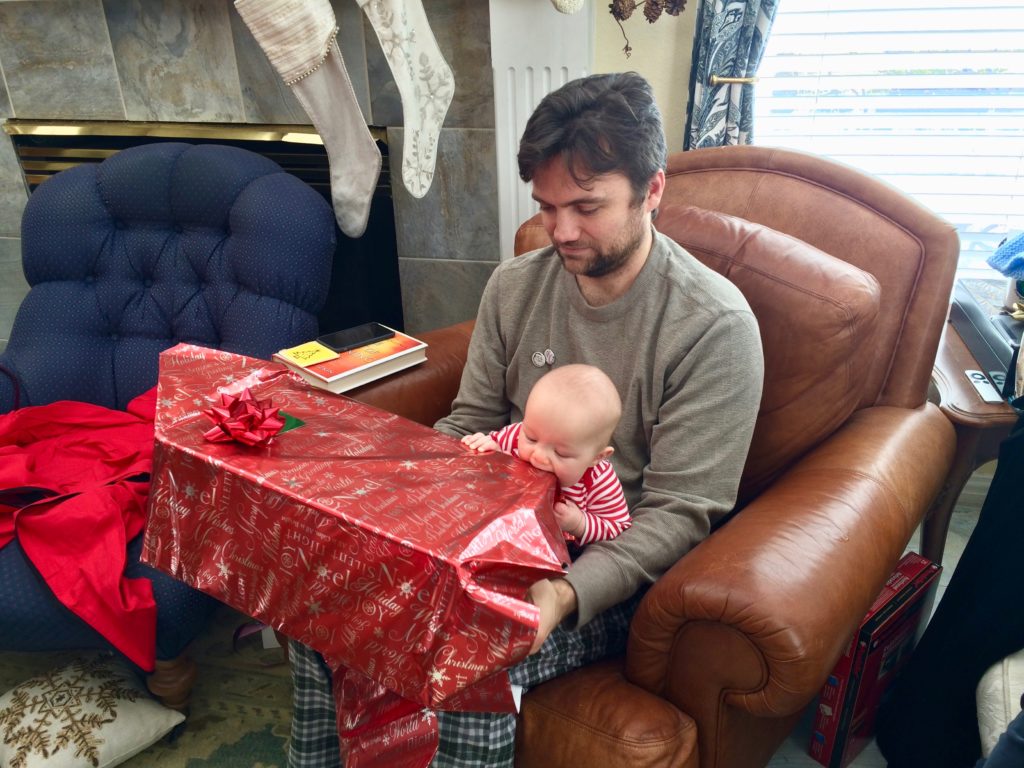 Leo figuring out the present unwrapping thing at 5 months old.

While I obviously loooooved all of the gifts I used to get as a child, I just don’t want my kids to end up with so much STUFF. I want them to have some stuff, just not sooo much. I have three reasons for this:

Here are some ways we’re working on this goal:

This is not how we do things with the kids, but one way we’ve simplified things is to do a “yankee swap” gift exchange with extended family members. We set a theme (it was “the outdoors” with Michael’s Colorado family this year), a price range (usually $20-$30 or less), and then have fun opening/swapping gifts among the group. It was such a load off my shoulders, and much kinder to our budget, when we stopped buying gifts for every individual family member. We still exchange gifts individually with Michael’s parents, brothers and their wives, but we’ve been doing yankee swap gift exchanges with my family and Michael’s Colorado family for the last several years and it seems to be enjoyed by everyone involved. For now, I like that we get to do it both ways. 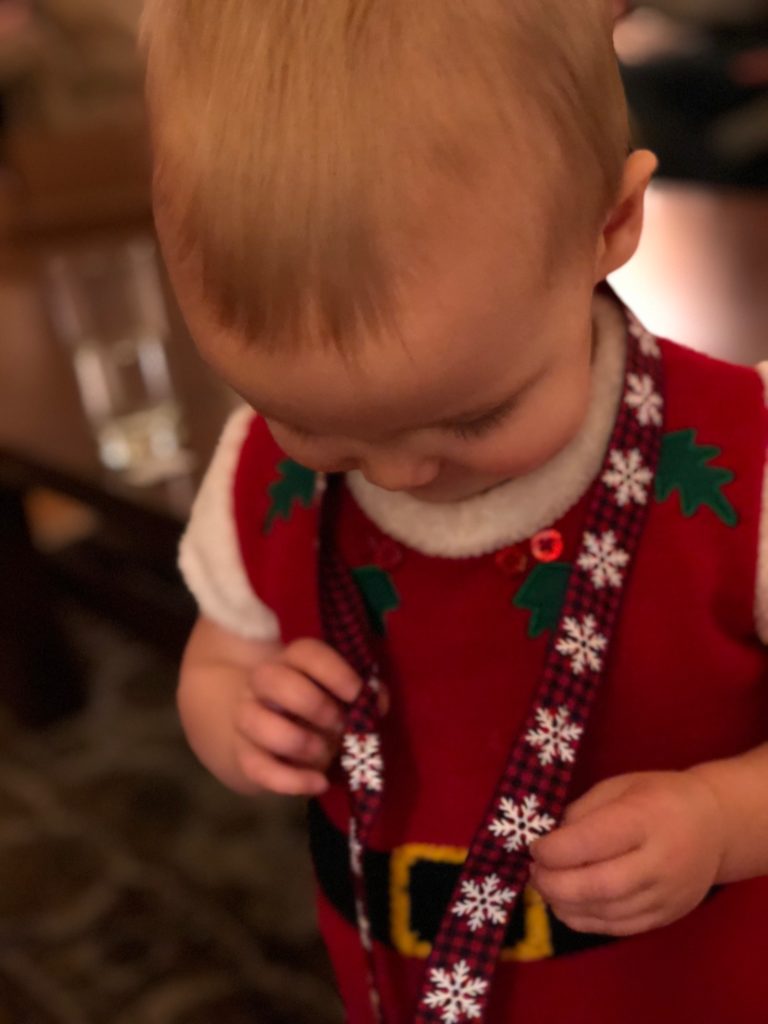 Marcella admiring some ribbon from one of the gifts unwrapped for the yankee swap at our recent family Christmas gathering.

There have been a handful of times when we invited over a large group of family or friends for a holiday gathering and provided all of the food. Uh, that is so expensive! And so much work! I love a good potluck. It makes things so much easier, it allows for accommodating different food preferences, and spreads out the financial/preparation burden of feeding a large group of people.

Throughout my childhood, my brother and I each made some sort of Christmas gift for our grandparents, aunts, and uncles every year. This kept our parents from having to buy something for us to give everyone (although I’m sure they funded the materials we used) but still allowed us to participate in the giving. I feel like it could have been annoying as a child, but I remember actually liking it. It’s just what we did. Some of the gifts I remember making: homemade chocolate chip cookies placed in boxes that I painted, potpourri sachets, cute Christmas ornaments, or giant bins of popcorn that I had popped and seasoned myself. This year the kids and I went with my moms club to a local ceramic studio where they cut out ornaments from clay that they’ll paint and give to Michael’s parents and brothers. 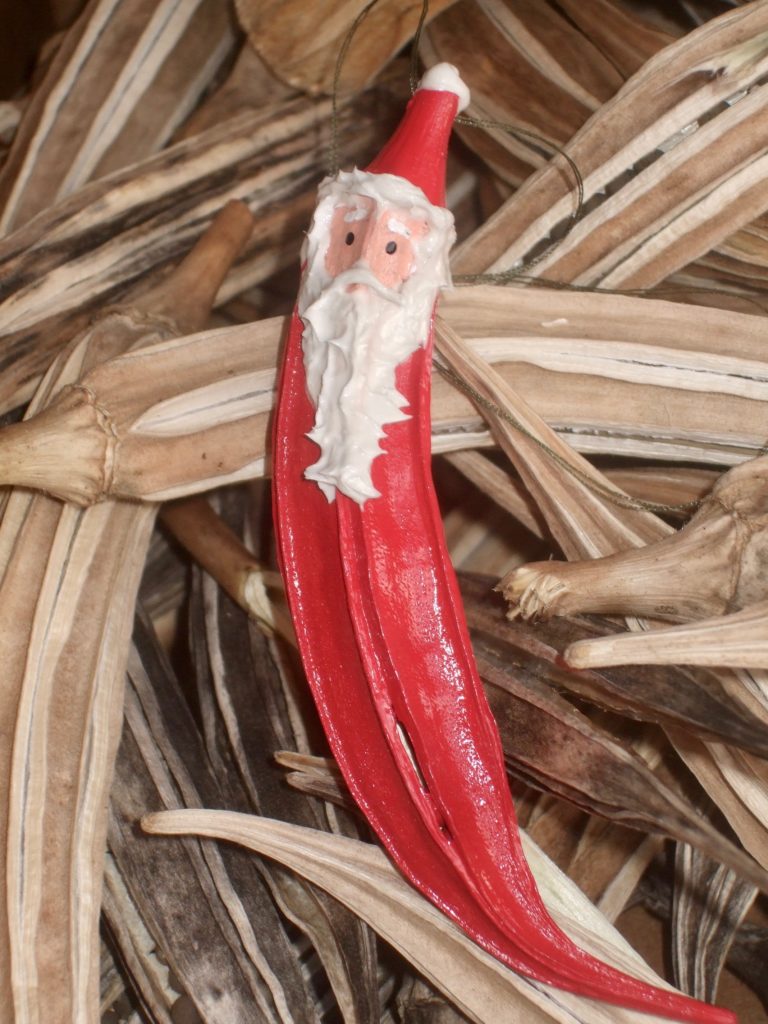 Okra Santa! I enjoyed making these, but I can’t take credit for the idea. I saw them online somewhere.

As an adult, I tried to keep up with this tradition as a way to give to friends and co-workers who wouldn’t otherwise be on my official shopping list. I’ve turned dried okra into super cute Santa ornaments, filled boxes with fancy truffle chocolates, and made jars of hot cocoa mix. That tradition stopped as soon as we had Leo, though!

I sort of get lured in by the fancy wreaths, lights, and cutesy reindeer figurines that they start putting out around Halloween (Halloween!? Terrible!!). But, I never buy any of it. We have a small collection of items we either inherited or received as gifts over the years and it’s enough to make the house feel festive each December. I love the lights that our neighbors put on their houses, but we don’t have any ourselves (except the lovely glow of the Christmas tree in the bay window). We have a crazy old fake tree we drag out of the garage each year. I know a real tree is absolutely essential for many people, but I grew up with a fake one, so it’s no biggie for me. The damn thing still drops plenty of needles.

Santa or no Santa?

I think one of the reasons I often ended up with so many gifts under the tree was that a bunch also came from Santa. (So odd, but his handwriting was just like my mom’s). My parents definitely kept up the ruse until my grandmother told me quite matter-of-factly that there was definitely no Santa. I was about 7 at the time and was certainly on to that truth already, but didn’t really want anyone to tell me what I already assumed. I told my mom and she explained that Santa was simply “the spirit of Christmas”. As a group of my 2nd grade peers engaged in an intellectual is-Santa-real-debate, I calmly stated what my mother had told me. I was promptly mocked by the class bully. I’m pretty sure that was when the whole Santa thing officially ended for me. Jerk.

So I’ve been polling my friends. Santa or no Santa? Does he bring gifts? How deep into the story do we go? The conclusion we’ve come to (ok, my conclusion that Michael has agreed to agree to), is to let Santa be the “spirit of Christmas”. He’s going to be in the books we read, the songs we hear, and the movies we watch. He’s going to be all around town with kids on his lap (ugh, that actually sounds so wrong), and he’s even going to bring one combined gift for the kids. That’s what my friend does for her three boys. One gift that they can all enjoy together. I like that. When they ask where this bearded white guy with the big belly really comes from, I’ll be armed with a super sappy response like, “our hearts.” And the North Pole. With Rudolph.

It’s fun to think through some of the things that help Christmas permeate the entire month of December making it all feel so special. There are so many options – seeing The Nutcracker, riding on The Polar Express train (there are a couple options near us in CO), paying for pictures on Santa’s lap, shopping, shopping, and shopping!

With our minimalist approach to the whole thing, I think we’ll stick to the following: 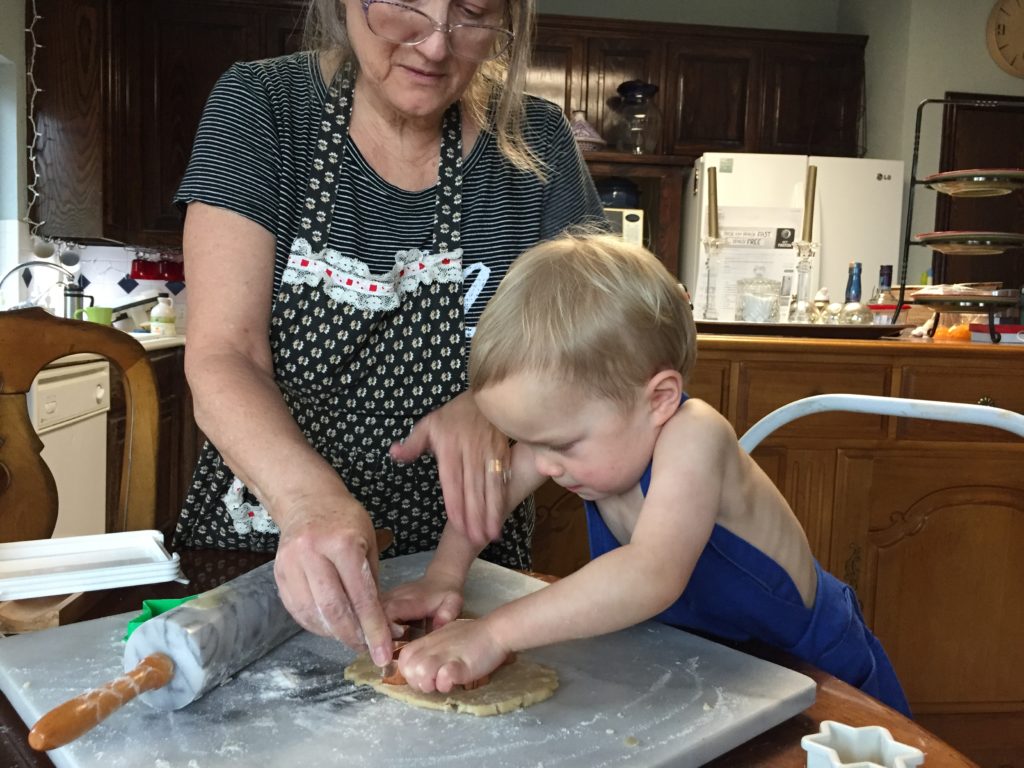 And then there’s something I really want to put a lot of heart and thought into.

The truth is, we don’t have this entirely figured out. Yet. Michael and I agreed that it would be really meaningful for our kids if each year we decided as a family something we could do that would benefit others. The kids are too young to really come up with their own ideas so this year it’ll be up to us to decide. But as the kids get older, I’d like it to be something they brainstorm and we vote on as a family.

Because the kids are so little, I intend to keep it simple and concrete enough for at least my three year old to understand. Somewhat inspired by this incredibly touching article by Ms. Montana Money Adventures, I think I’ll let the kids pick out a gift for a little boy and a little girl from one of those giving trees strategically placed in local stores. We’ll make sure they know it’s not for them. It’s something special that they get to choose. For someone else.

As I said before, the goal is for us to approach the holiday season in a mindful way. This is what has been on our minds a lot as we lay the foundation of our family’s holiday traditions. Somehow, we want to make our way through the coming years with Christmas being a time when our kids experience all of the joy, magic and coziness. Without all the stress, excess, and craziness.