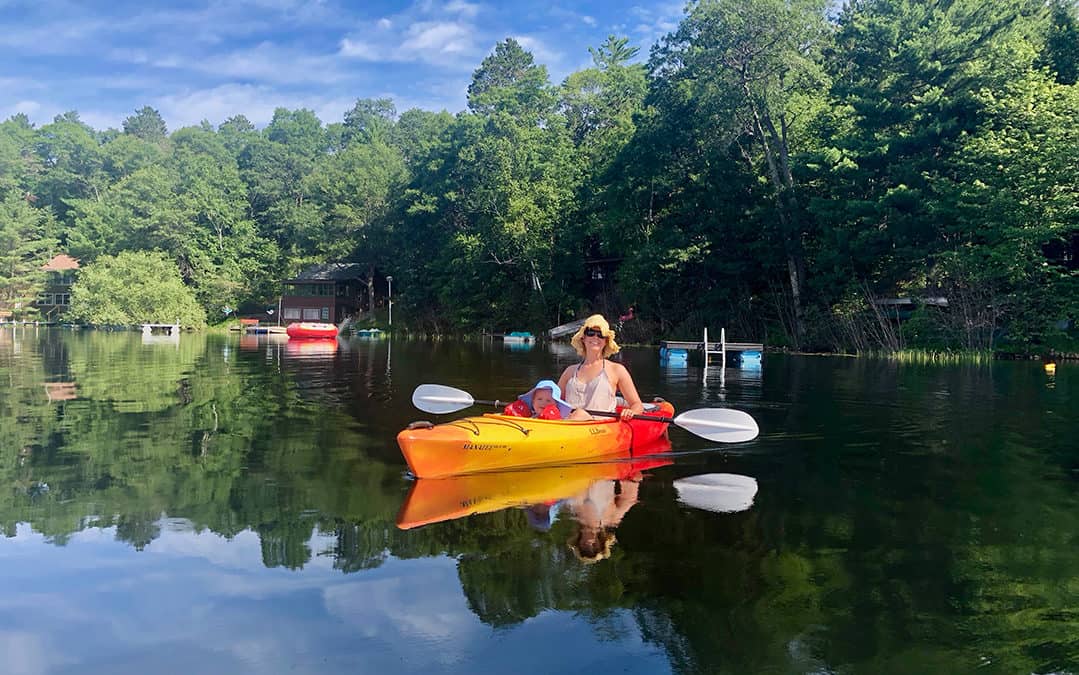 Plus, What I Pack in the Car for Hours of Travel with Two Kids

I enjoy reading about other people’s travel stories. You just can’t get the same sense of place reading from a guide book or flipping through the pages of a magazine. Here’s a recap of our travels to the Midwest this summer.

Our plans were based on a trip to Lake of the Ozarks, Missouri for a week-long reunion with my side of the family. I took it as an excuse to go back to my hometown and visit high school friends in the ‘burbs of Chicago. I mean, once you’re in Missouri, what’s another 8 hours to Chicago? A good friend’s family has a house on a small lake in northern Wisconsin, and they invited us to chill up there for a bit. After that, we had to make our way back to Colorado. So we broke up the long road with a stop in Minneapolis and a few nights in the Black Hills. 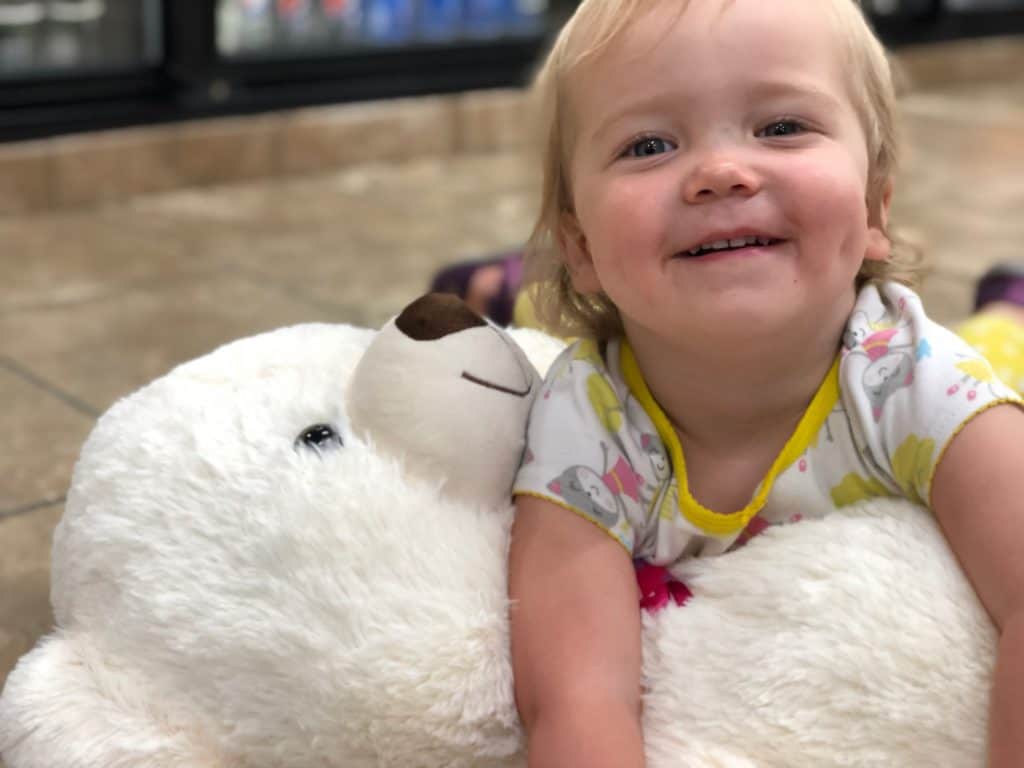 This is Marcella happily playing with a teddy bear… on the filthy floor of a gas station somewhere in Kansas on our way to Missouri. I was appalled and Michael was so pleased.

Lake of the Ozarks, Missouri

This was classic summer lake house time. My parents generously rented a home that could accommodate all 16 us. Most days involved lazy afternoons just hanging on the dock with a beer and more floating devices than people. Poker and margaritas at night. 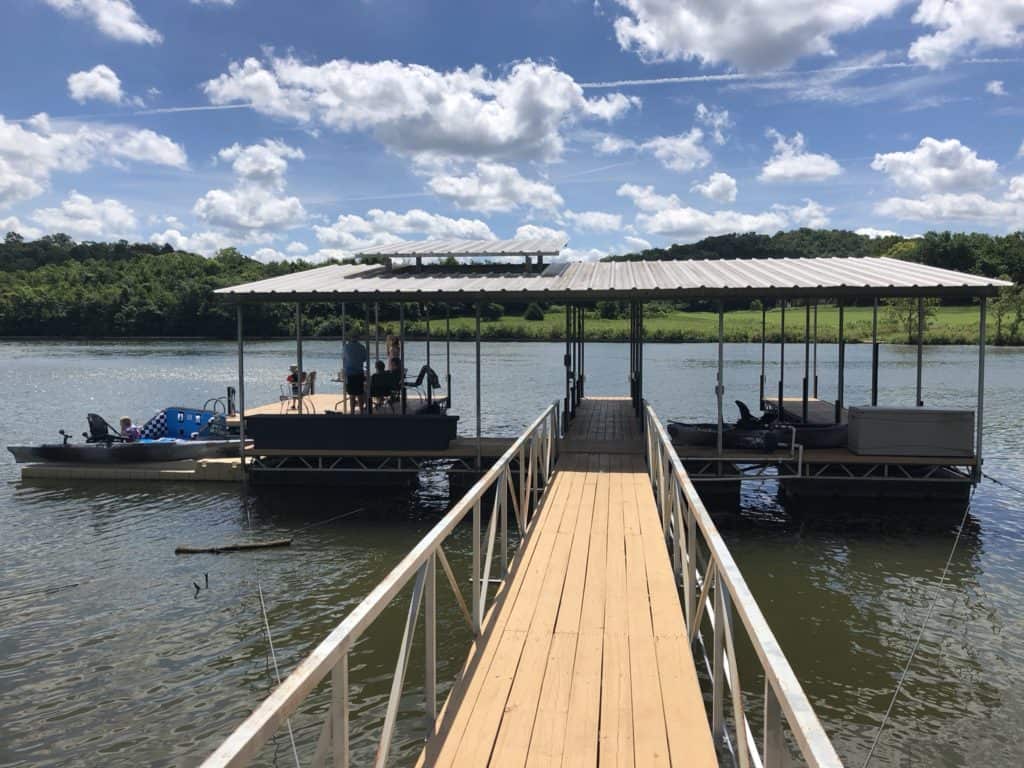 The dock that came with the house rental. Not bad.

Not surprisingly, it’s super humid in Missouri in July. That was manageable with a jump in the lake, but any other outdoor activities are pretty uncomfortable. 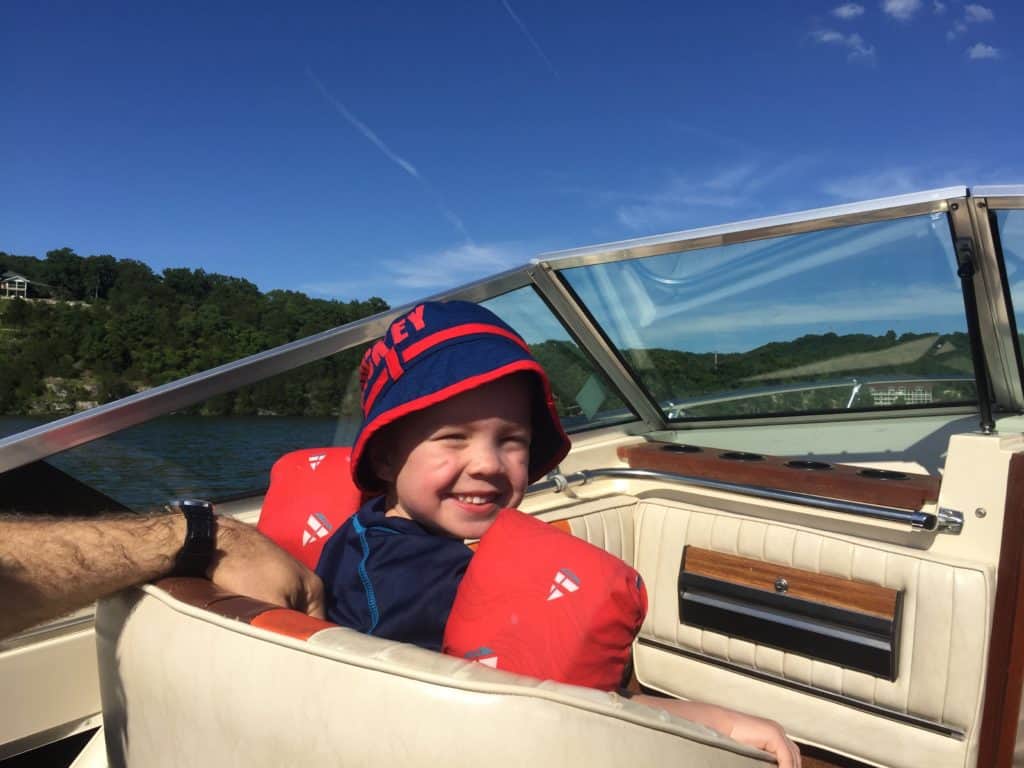 Leo sporting the Mickey Mouse hat someone in our group found floating in the water.

As a side note, Missouri was the first time Marcella got to use a puddle jumper. She was so darn cute. “Me swim! Me splash!” 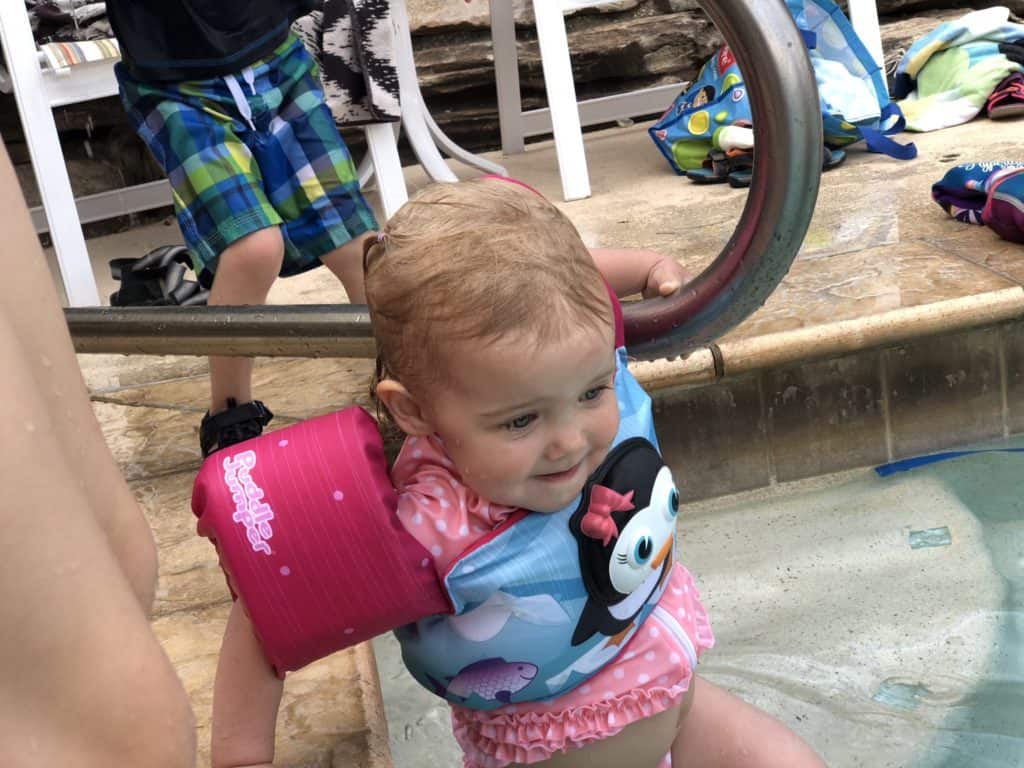 Marcella’s first time in a pool with a puddle jumper and she’s fearless.

I grew up in Batavia, about 45 minutes due west of Chicago (with no traffic… which happens never). I sort of hated it at the time. Chicago is urban sprawl at its worst, but at least most of the towns have their own history and charm. Batavia is right on the Fox River and was started with a thriving windmill industry in the early 1800s.

We spent the night with a friend’s parents and I sort of floated in the nostalgia of their home where I had spent much of my high school days hanging out with my best friend.

The next day we met up with some other high school friends at the farmers market down by the river. Batavia seems to have been truly intentional about building its community. It’s hard to appreciate things like bike paths, trees, and a river when you’re a kid. But, having since lived in the suburbs of Dallas, where the town we lived in was literally started by developers in the 70s looking to profit off of a newly created lake, I have a renewed appreciation of where I grew up. I was lucky. 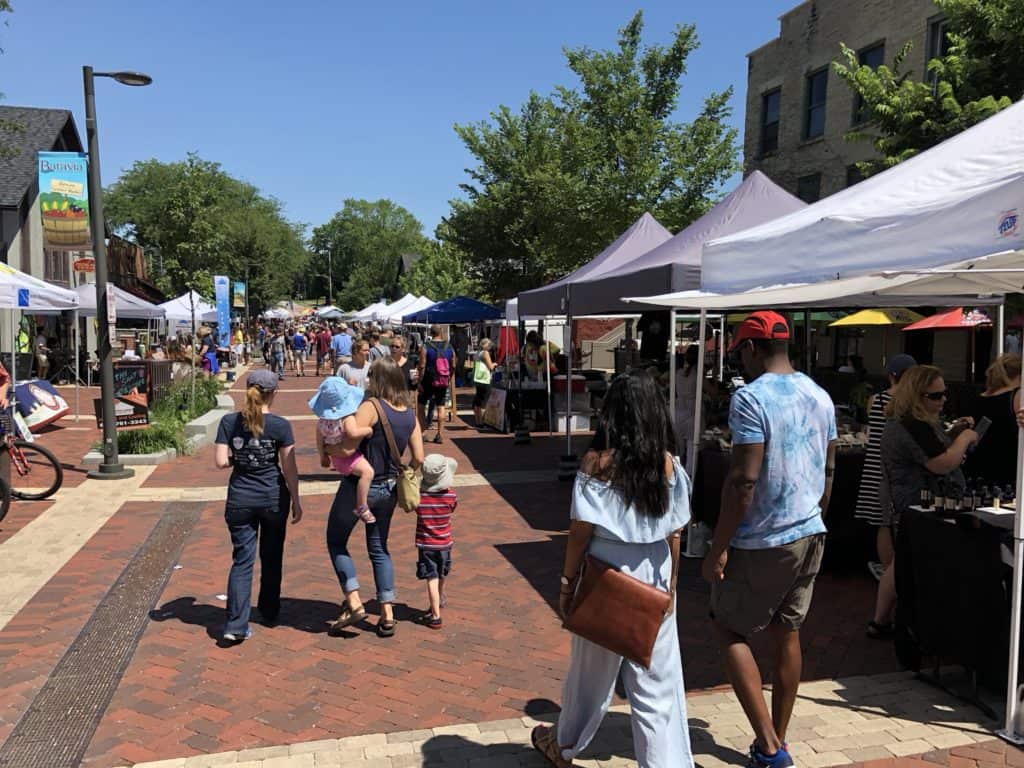 Catching up with high school friends after too many years

Now this little town in northern Wisconsin is pretty darn cute. My friend’s family has built a house on one of the many lakes. They drive up there from the Chicago area as often as possible, even in the winter. In fact, I was told winter is the best time to be there. There are no mosquitoes, and it’s super beautiful after a fresh snow. 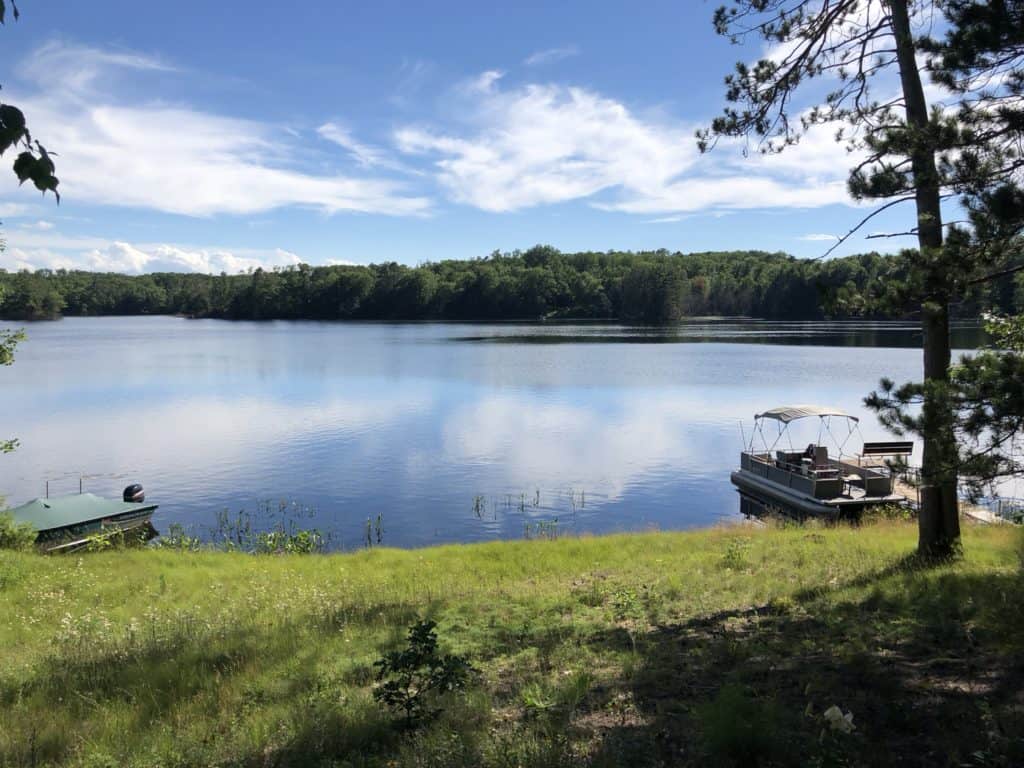 The view from the lake house. This worked just fine for us.

Our days there were mostly about hanging out in the house and swimming post naps. I never took the kids into town since a 2 yr. old and 3 yr. old don’t mix well with cute trinket shops. But, we drove through it so I could confirm that it was indeed a quaint downtown with trinket shops. 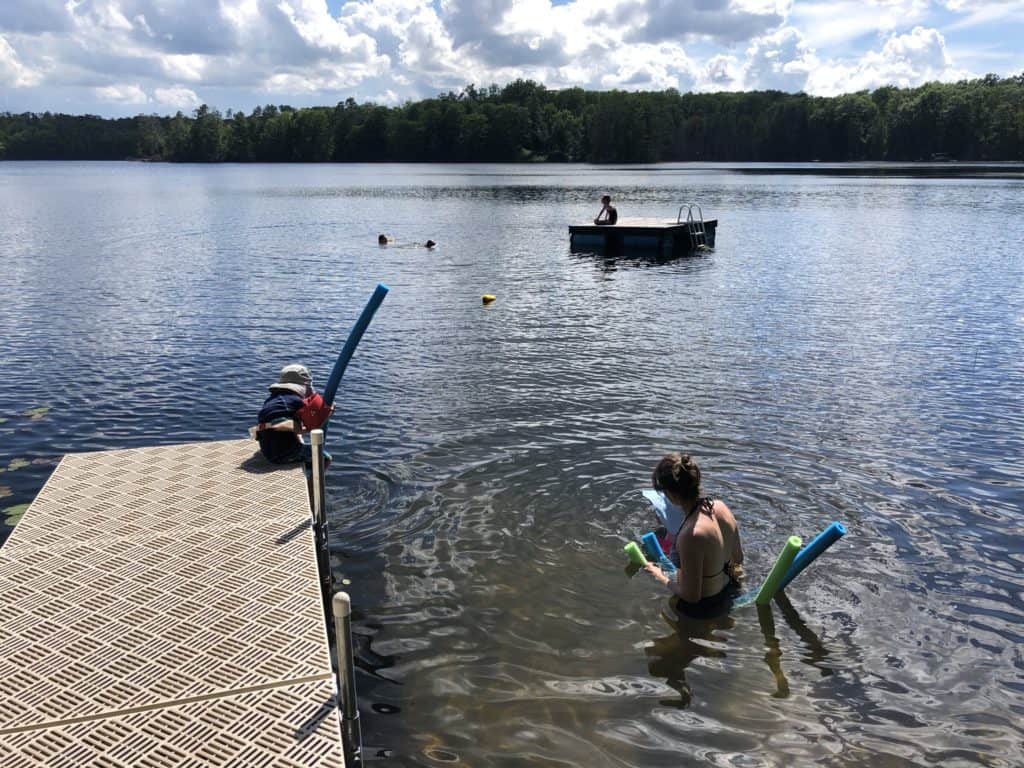 The kids and I were equally squeamish about swimming through the seaweed, but pool noodles helped us float above it until we could get to the deeper water by the floating dock. 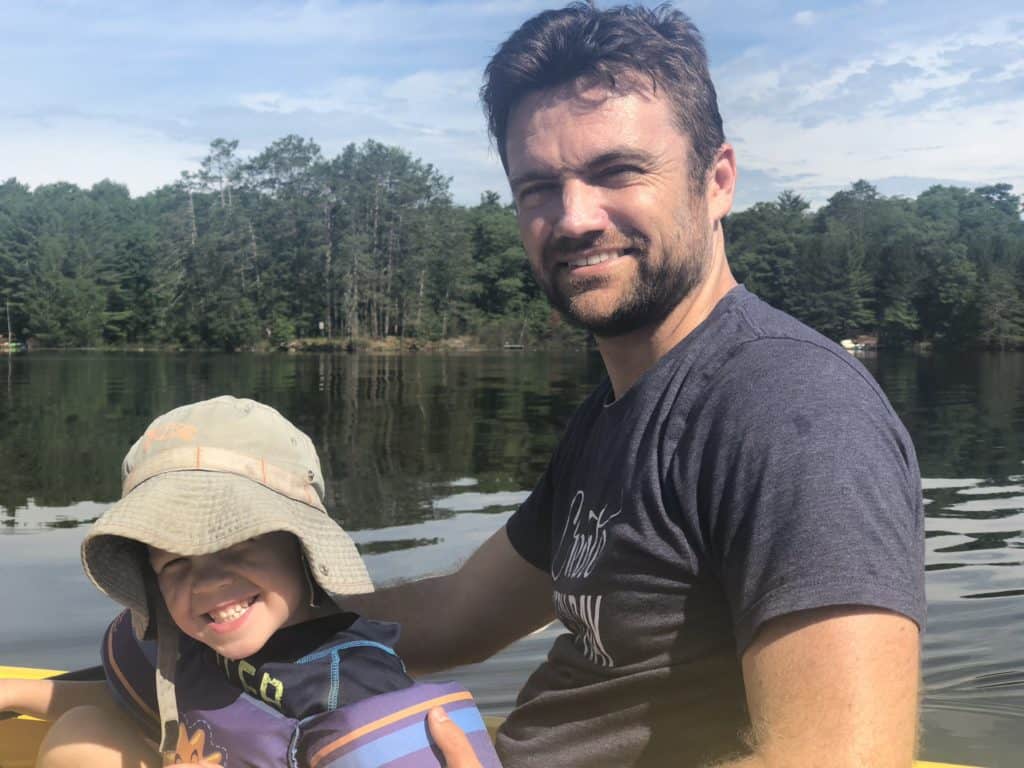 We managed to get out for a kayaking trip around the small lake. Michael really needs a hat or some sunglasses. Or both.

My attempt at “vacationing” while parenting. It lasted about 5 minutes.

This was only about a 4 hour drive from Minocqua, and seemed like a good place to stop for a night. We only had an afternoon to be there, and used it to catch up with Gwen from Fiery Millennials and Erik from The Mastermind Within . We stayed in an Airbnb rental and left early the next day for a long 9+ hours to the Black Hills.

For what felt like at least 100 miles, we watched as signs for “Wall Drug” dotted the open landscape along I-90. I kept marveling over the advertising effort to get us to stop when we got to that tiny town. But wouldn’t you know, it totally worked!

We were getting there just as we were needing to stop for some gas and dinner. We pulled off the highway and took about 10 seconds to decide between Subway and the tourist trap. Thanks to the excessive messaging we’d been absorbing for the past 1 – 2 hours of driving, we opted for the tourist trap. (Plus, I kind of hate Subway).

We had some greasy veggie burgers and French fries before taking about 30 minutes to see all there was to see. 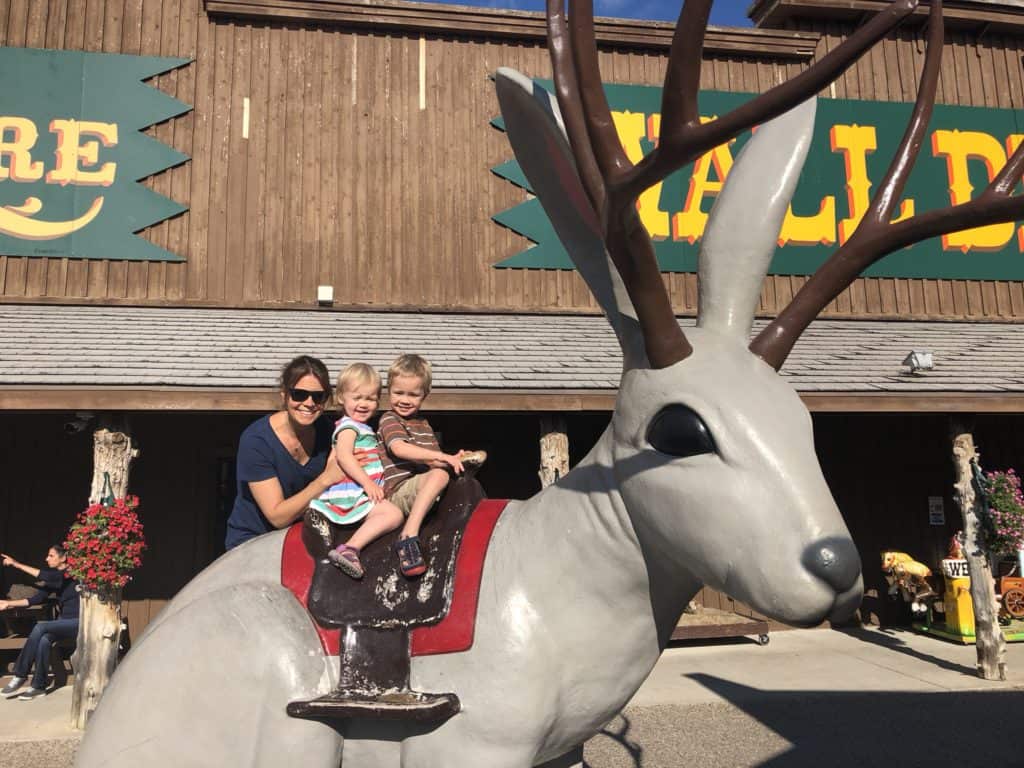 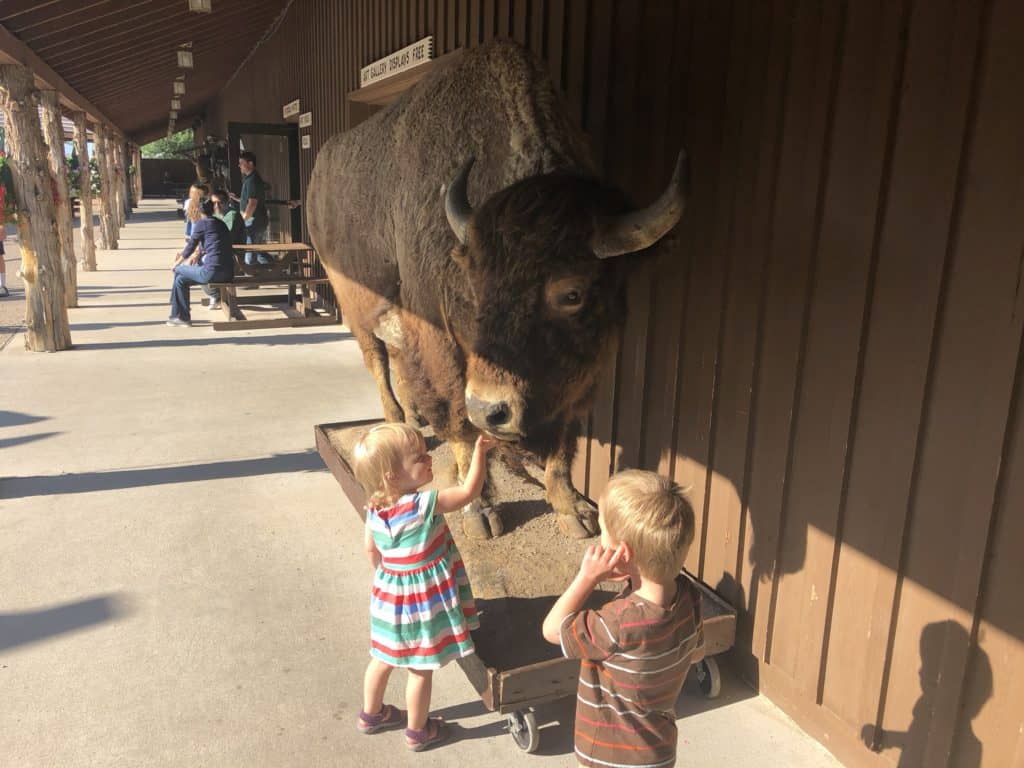 Taxidermy. Tough one to explain. 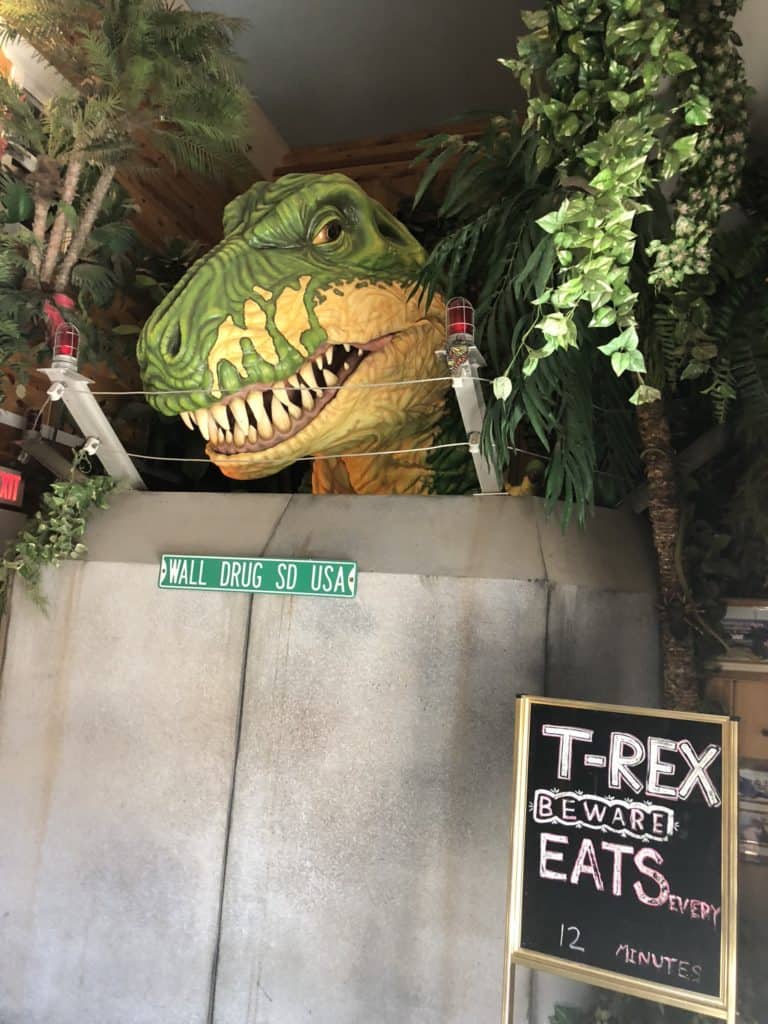 About 5 seconds after we walked up to him, this guy started spewing steam, moving, blinking, and roaring. The kids were terrified and we spent the next two days talking about how the “robot T-Rex” was not real.

We’ll need to return to this part of the country. First, there are the Badlands. I regret we didn’t stop as we drove right past them. The kids were exhausted (we’d been in the car all day). We told ourselves it was only about 1-2 hours from where we were staying and we could make a day trip out of it. But we didn’t.

We stayed in Spearfish in an Airbnb rental that was perfect for our family. It had two bedrooms and was situated right on a shallow creek. The kids were perfectly happy to wade and throw rocks in there all day.

We only spent three nights there (the minimum we felt we needed to enjoy a day or two of down time while still getting home in time for Leo’s 4th birthday). The first full day was a trip to Mount Rushmore, because, duh. I’m glad we went because faces carved into the side of a mountain ARE pretty cool. But, such crowds! The line of cars turning in to park was silly. We were moving so slowly that I had time to get Leo in and out of his car seat so he could pee on a tree without any risk of Michael leaving us behind. 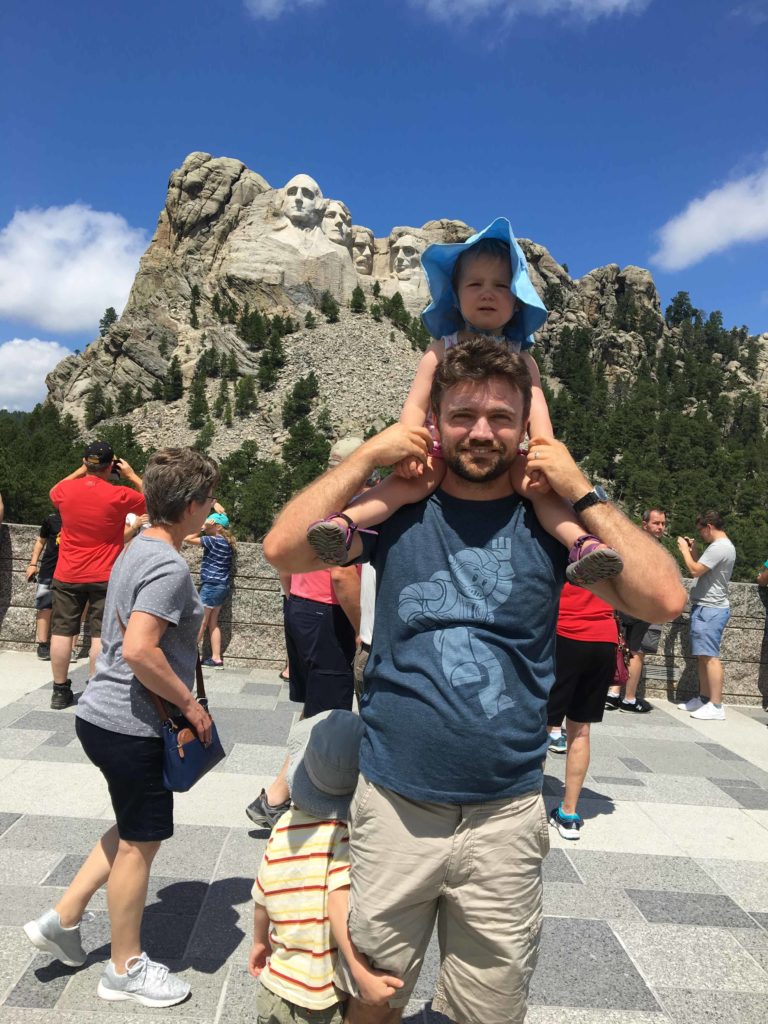 We never even took a good family photo. Oh well.

There was still lots more we could have seen, which is why we’ll need to go back. Our second full day was spent wading through the creek while Michael caught up on some work. 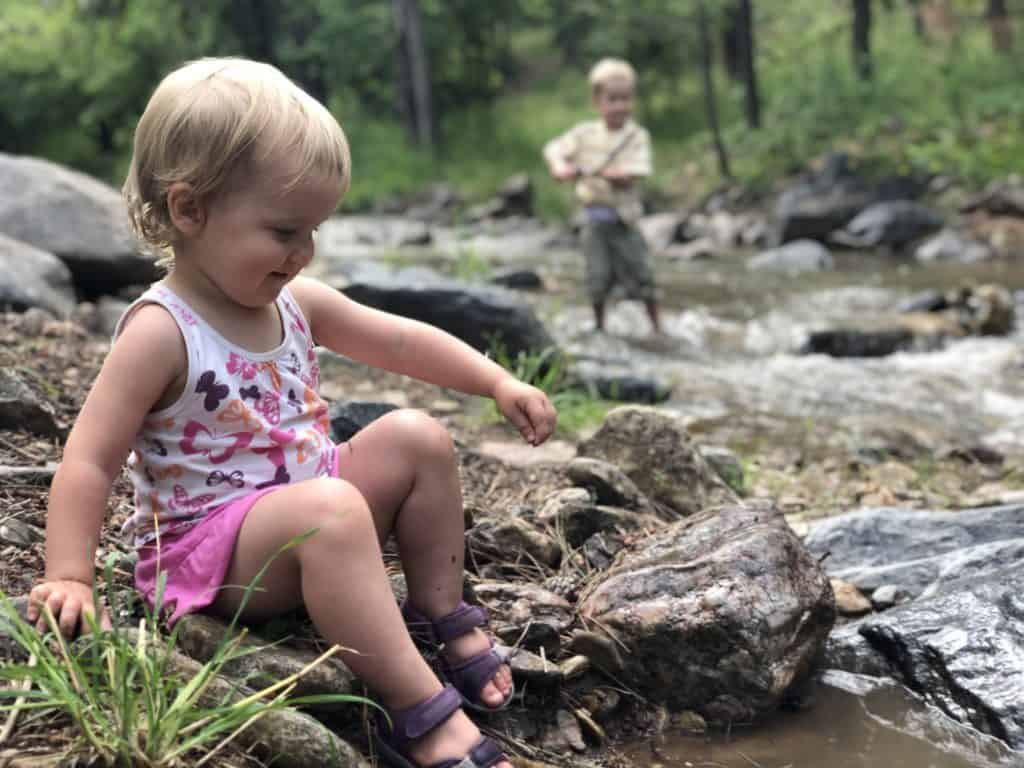 Our route home from there was only about 5 hours, so we opted to make a side trip to see the Devil’s Tower in Wyoming. Again, it was a stupidly long/slow line to get into the park, so we pulled off at the convenient shop right there and ate our lunch on one of the picnic tables behind the store. It was actually a perfect spot to see the tower, so we just took our time there before starting the trip home. 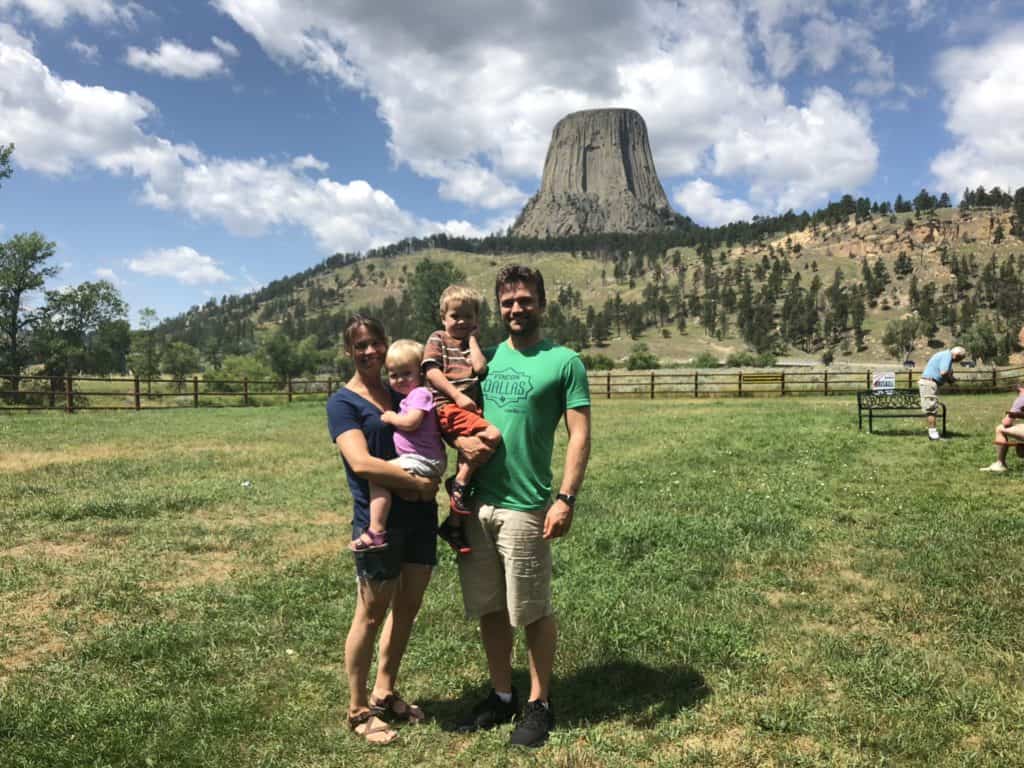 About a week after we returned home is when I left again for a week-long solo trip. Even though that alone time was absolutely amazing, so was the time with my family. The kids are now 2 and 4 (Leo was in his last weeks as a 3 yr. old on the trip), and they just keep getting easier to travel with. I think it’s partly their age and partly because we do it so often.

In preparation for any travel with the kids I do two things:

Some of our biggest “wins” in terms of happy/occupied kids time:

By the end of a road trip, the back seat is an ocean of chaos as the kids cast off toys and crumbs (why didn’t I take a picture of that?!?). I’m proud to say that we have, so far, avoided having to give them any type of screen. I grew up traveling around the country in my family’s minivan, and really loved reading or just staring out the window. I already see both of my kids doing that… just looking out the window and thinking about whatever 2 year olds and 4 year olds think about.

I really enjoyed this article by Ms. Montana Money about the 10 week road trip her family of 7 took this summer. She does a great job of addressing some of the misconceptions about traveling with kids. It is really so doable. And really so fun. 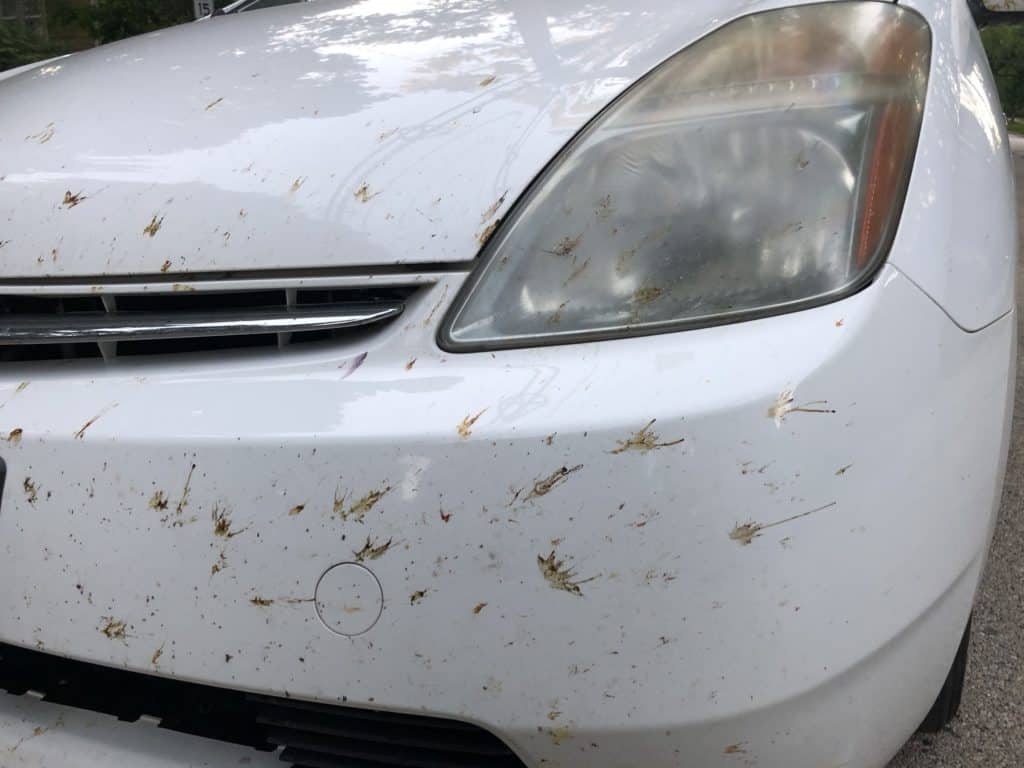 My condolences to all the insects whose lives were lost in the name of family fun. Eew.

The memories and family/friend connections we establish on trips like this are absolutely worth whatever challenges get mixed in. Our next big trip will be abroad, but I can’t wait for many more road trips across the U.S. Where to go??