What I Wish I Could Have Said on PBS NewsHour 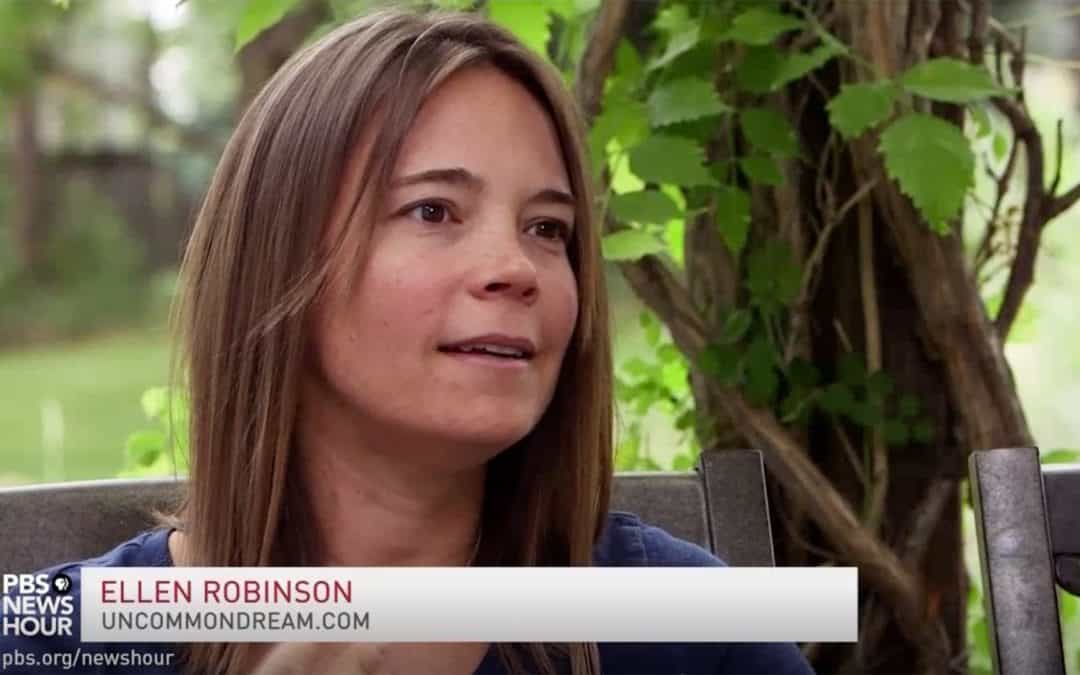 We had the honor of participating in a story on PBS NewsHour with Mr. Money Mustache. Also featured were Mark & Sina Ebersole and Michelle Jackson, all of whom Michael met through his time at the MMM Headquarters. Over the weeks that we waited for it to air, I’d find myself dwelling over the details of the story. The things left unsaid. The examples needing more explanation. The PBS NewsHour crew spent half a day filming with us at our house and we knew our appearance would likely be distilled down to 30 seconds or so. Which 30 seconds? It’s been a few days since the segment aired, and there is a healthy collection of comments at this point. Some are positive while others are not — no surprise there. All-in-all, we’re really happy with how the segment turned out. The PBS NewsHour team did a great job of pulling together a balanced and thought-provoking overview of the FIRE movement and why someone may want to consider this path. It’s been encouraging to read the contributions to the conversation by fellow members of the FIRE movement. A sense of community is so important and powerful. A comment using the term “libtard” probably wasn’t even worth the eye roll it got. But the sweet spot are the people who seem genuinely empowered to think about their money differently. I have to agree with some of the feedback that this particular story glossed over the details of each person/family’s lives. That’s a necessary part of distilling down several lifetimes’ worth of learning into one digestible segment. In nine minutes and 27 seconds, you can’t really dig into every related topic like taxes, insurance, and a lifetime of white privilege. I can’t and won’t cover every detail here either. For people looking to really dig in and understand how early retirement is possible, Pete’s website has 400+ articles and a very active forum where thousands of contributors, thousands of voices, have shared their stories and answered each other’s questions. A great place to start is Pete’s article Getting Rich: From Zero to Hero in One Blog Post. But I might as well use this screen as a space to sort through some of the thoughts I have on all of it. Some of what I wish I could have said.

It’s true. Michael and I are both white, middle class, and have directly benefitted from the advantages that come with not being racially/economically discriminated against. Damn, how I wish that wasn’t the current reality. I tend to think in metaphors. And for me, Financial Independence is the peak of a mountain. It’s a hell of a trek to the top. We all know it’s there. We’d all love to be there. Some people area already born there. Others get to start somewhere in the middle, others at the bottom. And some can’t even see the top of the mountain yet because they’re buried beneath it. Why bother climbing towards the top? Because up there, in the land of Financial Independence, is freedom. Not a lack of work. Not a lack of temptations. Not a lack of questions or insecurities. Just the freedom to do with your time as you choose. Plain and simple. But no one will get there if they don’t take any steps in the right direction. Even those who were lucky enough to be born at the top had best be mindful of their step, so as not to go tumbling down. A disservice of any segment or article covering financial independence in a few minutes is that they give the impression that the stories profiled are representative of the entire movement. That there’s only one path to that top that often looks white and middle class. But frankly, there are an endless number of routes. If the peak is your goal, you have to start heading there. One foot in front of the other. One person might have more obstacles than another. But that doesn’t mean you don’t try. Another more rocky, circuitous route might be required.

Lessons From Our Journey to Financial Independence

Honestly, before I met Michael, the idea of Financial Independence was not in my lexicon. I was slowly headed up the mountain without thinking much about it. And I assumed I’d retire when most people expect to, perhaps at 65+ if I was lucky. I was careful with my money, but didn’t go much deeper than “Saving = Good”. Then Michael comes into my life in 2004. He’d read books like Common Sense on Mutual Funds, The Four Pillars of Investing, and The Millionaire Next Door (Michael recently received a review copy of the sequel — The Next Millionaire Next Door — and plans to review it soon). He’d done the research and was already investing in index funds at Vanguard. He helped me do the same. Because I was already a naturally frugal person (thanks, Mom & Dad!), it was in no way a stretch for me to make a shift in my thinking. You mean we could have enough money to not have to work when we’re in our thirties? Cool! Sign me up. Michael was the one who plotted out our path. He knew the lifestyle shortcuts we’d need to take to get us to the top more quickly. One car, cheap housing, mindful spending, a helpful spreadsheet to keep track of our progress, and monthly meetings to review our household finances. In those early days, the top of the mountain still seemed soooo far away. But, we just kept plugging away, one step in front of the other. And holy cow, before we knew it, that peak was staring us right in the face. For anyone who has ever climbed an actual mountain. It’s a lot like that. You just look down at the ground, put one foot in front of the other, and plod along. Depending on what physical condition you’re in, it is really hard work. It might require LOTS of stops and breaks along the way. Return to the path, keep taking steps, and you’ll get there. Some sooner than others. But if you’re only headed downhill, that peak is definitely not in your future.

One of my very favorite people grew up in a context quite different from my own. Her family is from the South Side of Chicago in a predominantly African American community. My friend’s mother is a successful professional who has battled the relentless pressure to prove herself in a corporate position surrounded by white colleagues. Like many adults of any race, she took on a lot of debt to raise my friend and her brother on her own in the suburbs. This friend of mine consequently put herself through college. She took on over $90,000 worth of student loans and came out with several degrees, including a Masters in Architecture. She now lives in the Pacific Northwest, doing important work that she loves, and making a salary worthy of her schooling. In the last month, she made her very last student loan payment. Instead of following the status quo — buying fancy new cars, clothes, and houses — she has lived in a modest apartment, used her legs and public transportation to get around town, and steadily paid down her debt. She is approaching 40, debt free, and investing her money as she chooses. And living a badass life too, I should add. She has had to take a much more challenging route than us. It’s completely and totally unfair. But she knows that peak is there, and is making her way up. If she continues at her current pace, she’ll reach the summit long before 65 despite the rocky road she has had to travel. What do we do when we get there? Whatever we want. Maybe we quit a job that we hate or maybe we finally live abroad. In my friend’s case, I imagine she’ll keep on doing the work that she loves. The journey doesn’t end once we get there. But finally, you get to catch your breath, and enjoy the view from the vantage point of freedom.

Financial Independence isn’t for Everyone, And That’s OK

It’s worth mentioning that not everyone cares about getting to the top of this metaphorical mountain. There is nothing wrong with taking the most well-worn path of earn and buy until you die. If you’re living a truly happy life, go for it. Who am I to tell anyone that they should try finding a shorter and more expedient route to retirement? I think the key to things like the PBS NewsHour story is simply knowing that the option is THERE. Choose it if you wish. Your path won’t look like ours. You might have started closer to the top or you might still be digging out from the bottom. But just know that it’s there. And you CAN take steps in that direction. As the FI/RE movement grows and expands into a more diverse community, so too are the paths being blazed. A quick review of Michael’s time at FinCon this year is a good example of that. There are SO MANY people out there writing about this from their unique perspectives! That’s such a good thing. Sticking with my mountain metaphor (once I get started, it’s hard to stop), it’s like there are all these people out there plotting a “choose your own adventure” trail. They’re hacking through the undergrowth and hammering in the signs. Got student loan debt? This way! Want to take a mini-retirement and then go back to working?! Over here! Looking for ideas on how to really reduce your expenses? Come this way! Interested in getting there through real estate investing? Yep, here’s a route for that too! Want to know what this life would be like with two young kids? Consider subscribing to our blog if you haven’t already. Finishing up this post, there is still so much left unsaid. Too much room for misconceptions and misunderstandings in the space between the lines. But that’s because it’s a lifetime of our stories. A child who loved to hoard her birthday dollars. A teenager who was profoundly moved by his grandmother’s disappointment when he asked to borrow money. A teenager who watched her mother die and transitioned into adulthood acutely aware of how brief our time here may be. A couple who decided early on that time and choice were more important than new cars and clothes. Each story is too complicated and it’s too easy to close the book if you don’t see yourself reflected in the pages. But I encourage all of us, ourselves included, to recognize that there are thousands of books in a library. Choose the one you need to read.