Travel and Transitions with Two Kids 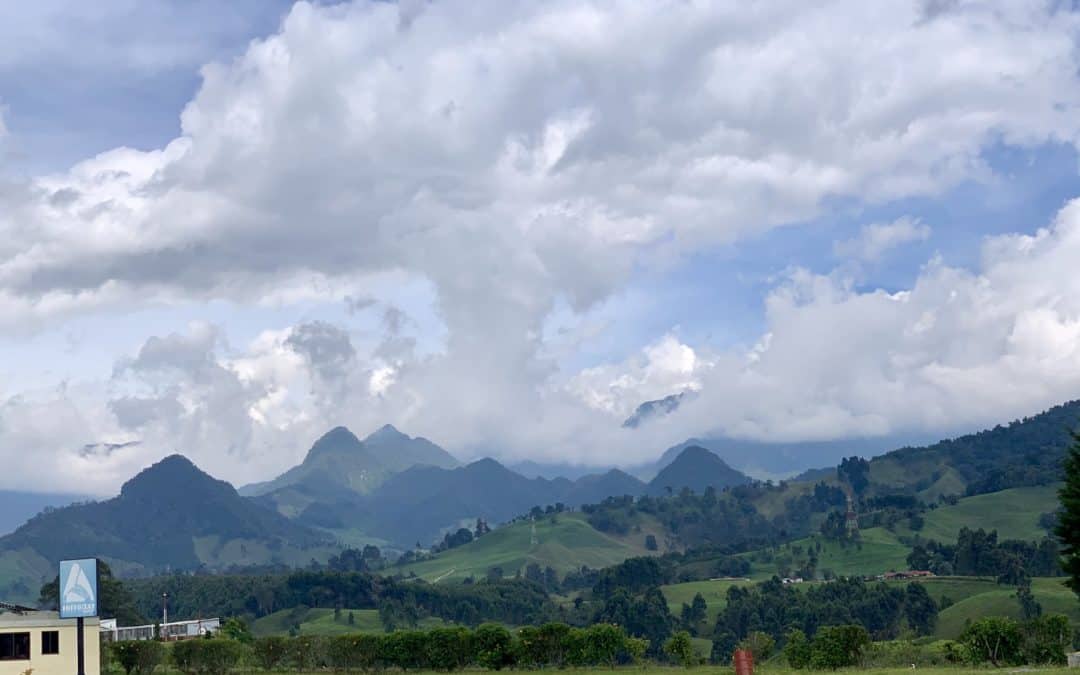 We left Costa Rica mid June and then headed back to the States for about 6 weeks of reconnecting with friends, family, and our space. Now here we are in Manizales, Colombia where we’ll hunker down for another 4 months before the holidays. We might then return to Colombia in January until Spring 2020.

We enjoyed our time in Costa Rica, but after much deliberation, decided it was time to try somewhere new. A couple conferences and a family reunion pulled us home in June/July for a bit. Even though it felt so good to be home for that time, we are sticking with the goal of getting our kids functionally bilingual before Leo starts kindergarten in 2020. We’ve heard so many great things about Colombia from fellow travelers, so here we are!

All of this travel has had me thinking about transitions. We’ve had a lot of transitions in the past several years. And each time, they fill me up with anticipation, hope, and a bit of dread.

Just for the sake of a little brain dump, I’ll humor myself with a list of the major ones we’ve worked our way through over the past 5 years.

July 2015 – Find out we’re pregnant with our daughter.

March 2016 – Move from Texas to Colorado. I leave behind my paid employment.

February 2017 – Put our house up on Airbnb and spend 3 months in Cuenca, Ecuador

December 2018 – Move out of our house, head to Texas for holiday celebrations

June 2019 – Move out of Costa Rica apartment (which included selling ALL of the stuff we we had bought less than 4 months prior). Move back into Colorado home.

July 2019 – Move out of Colorado home and drive to Texas to spend a week with YaYa and Gramps.

The above list is a bit self-indulgent, because who really cares about our “transition list” other than us. Everyone’s life is in a perpetual state of ebb and flow, and I try not to lose site of how incredibly lucky we are that our list looks like the one above.

But that is precisely what I’ve been thinking about A LOT lately, as we move through another big change. All of this transition from one adventure to the next is quite self-indulgent. For us; me and Michael. Not necessarily our kids.

I learned some big lessons during our time in Costa Rica. The biggest one being that I should not underestimate the impact these big changes have on our little people, Leo (just turned 5) and Marcella (3).

When we first arrived in Costa Rica, Leo in particular could best be described as a big ol’ hot mess. He has always been a kid with a vibrant spirit… he prefers to hang out on extreme ends of the emotional spectrum. He laughs big and cries hard.

Getting settled into our new life in Costa Rica was really hard on him. He was dissolving into tears and tantrums at the simplest of things (“that kid is on the swing!” “Marcella is using the marker I want!”). The ride from happy to complete despair was lightning fast, leaving Michael and I pretty much blown away. What is he so upset about?!? We were exhausted and perplexed. I let myself venture into the dangerous zone of extreme self doubt. What have I done to my child?

Looking back on that time, I’m a little ashamed by how obvious it was.

He was really struggling with the transition.

Leo is an incredibly bright and observant child. (Parent bias, obviously, but it’s so true). He also loves structure and routine. And control. He gets that from me.

By the time we arrived in Costa Rica and got him and Marcella enrolled in a really excellent little Montessori school, we had done the following in the span of 5 weeks:

Hmmm, that was kind of a lot for a kid who likes control and structure to deal with!

Fortunately, after a very bumpy start to his time in school, Leo started to make some developmental leaps that both Michael and I couldn’t help but notice. The tantrums and inexplicable meltdowns just about entirely faded away. He seemed much calmer, happier, and overall grounded.

All was pretty darn good until… we told the kids we’d be leaving Costa Rica. It was a rapid downward spiral to short tempers, quick outbursts, and inconsolable tears. Yikes. It manifested itself most obviously at school, where Leo seemed to be taking out his frustration and anger on his peers.

Again, looking back on this now, it seems so obvious. Transitions. At least this time we figured it out more quickly. It helped that the director of his school was pretty attune to her students’ needs and could also see the emotional root of his physical behavior.

So, while we thought we had been talking to the kids about the upcoming change in an open and matter-of-fact way, I think we needed to do it more.

In light of this awareness, we started to talk about the plan on an almost daily basis. First we’re going to go visit YaYa and Gramps in Texas. Then we’re going to see our friends and family in Colorado. THEN, after that, we’re going to start a new adventure in Colombia. Friends, family, new places to explore!

And we talked about how it made all of us feel. “Change is hard. It can be really sad to leave our friends. I get sad when I have to say good bye to people I care about.”

And also what we can do. “It makes me feel better knowing I can stay in touch with friends I’m leaving. And, even though I’m sad, I’m excited about the new adventure. I like to think about the exciting new things we’ll see and the people we’ll meet.”

And sure enough, Leo started to seem more grounded. More calm. More capable of controlling himself in an environment where he was starting to feel more in control. He really needed us to help him process the big changes in his world. He needed it a lot more than we would have thought he did. Not, to be clear, that he could verbalize that to us.

Marcella is three years old. She doesn’t seem to process the changes as negatively as Leo has, but the story telling and sharing the plan has still been so important for her. She would light up every time we talked about what was coming and she’d finish with, “and then us go Colombia!!”

This practice of mentally processing/envisioning what was to come before we ever got to Costa Rica would have been excellent for my wellbeing and Michael’s as well. On several occasions after we sat down completely exhausted after a day of traipsing around San Ramón and dealing with a mentally distraught child, Michael and I commented to one another about how we had forgotten how hard it can be to set up life in a new place. Oops! A little story telling and visualizing probably would have done us well too.

I’m sharing this because I wish I had read something like this before we started traveling with our kids. The road we traveled was bumpy. We’ve hit some major potholes along the way.

I wish I had known that one of the best ways to pave it smooth was to talk about what was ahead first. Really mentally walk that road with our kids before we actually start the journey. Back and forth, back and forth… trying to anticipate some of those bumps before we even get there. Acknowledge them (we’re going to be sleeping in different beds for a while or we’re going to have to say good bye to our friends and we will miss them), so that they’re easier for the kids to navigate when they’re actually presented with the obstacle.

During the week that Leo was having a particularly difficult time, I searched online using the terms “mindful strategies for 4 year olds” The amount of information out there is daunting, but here are the two resources that I found incredibly helpful:

Nurture and Thrive. This website had exactly the type of simple/easy to digest/tangible suggestions on kids’ emotional needs that I NEEDED to read then.

Unruffled. This is a podcast by Janet Lansbury, who wrote No Bad Kids. I probably listened to over 5 hours of her short 10 – 20 minute episodes over the course of a week when I discovered it. She responds with respectful/positive parenting advice to readers who have written in to ask her about something specific with their child. I like to scroll through to the topics in her episode archive that apply to our family, and it is SO helpful. Her approach to parenting is inspiring but also feels completely attainable.

With all that said, it’s also worth mentioning how much I actually love transitions. Here are several reasons why:

In the darkest of the dark moments we’ve had on this particular journey, it definitely crossed my mind that maybe we should abandon ship. Pack up, rethink the Spanish immersion for the kids, and just get back to our normal life in Colorado.

Dark times are definitely not good decision making times. After things stabilized a bit, it was much easier to think clearly about what we’re doing and why we’re doing it.

We are giving our kids the opportunity to authentically acquire a second language. And it’s actually working! After just 4.5 months in Costa Rica (even interrupted with much travel), the kids are understanding so much and saying all sorts of words and phrases in Spanish. They both say things like vámonos (let’s go), ayúdeme (help me), vea (look!) “no puedo” (I can’t). It feels like they’re sitting at a tipping point – understanding most of what people say and almost ready to start responding in full sentences/thoughts.

Now that they’ve already started at a preschool in Colombia, the teachers tell me that they seem to understand basically everything that is said to them in Spanish. They still choose to speak in English with us, of course, but there are little gems that get sprinkled in. I love how Leo always uses the word mucho instead of “more” or Marcella often chooses to count things out in Spanish. When Leo is exasperated at my lack of attention, he’ll declare Mama, venga! (come here!).

Throughout this language learning endeavor, we’re exploring other parts of the world, meeting interesting people, developing friendships, and providing ourselves with a rich context in which to do it.

And yep, the transitions are a little hard. Sometimes really hard. As parents, this experience has taught us that we need to be more mindful about preparing our children for what lies ahead.

We now know to mentally let our boots hit the pavement before we even begin the journey. We need to help them to envision ourselves along the path. Picture what’s coming up for us as a family. How might we feel? How can we handle it when we get there? Flex our emotional muscles so the upcoming transition doesn’t seem so scary because we’ve mentally encountered it before.

We left Costa Rica in June, spent July home with friends and family, and here we are in beautiful Manizales, Colombia. Of the 4 transitions we have made to live in another country with our two young children, this has been our smoothest experience. The kids are (mostly) happy, learning Spanish, and expanding their comfort zone. With some mindfulness towards what is to come, we are all better able to navigate the inevitable bumps ahead.